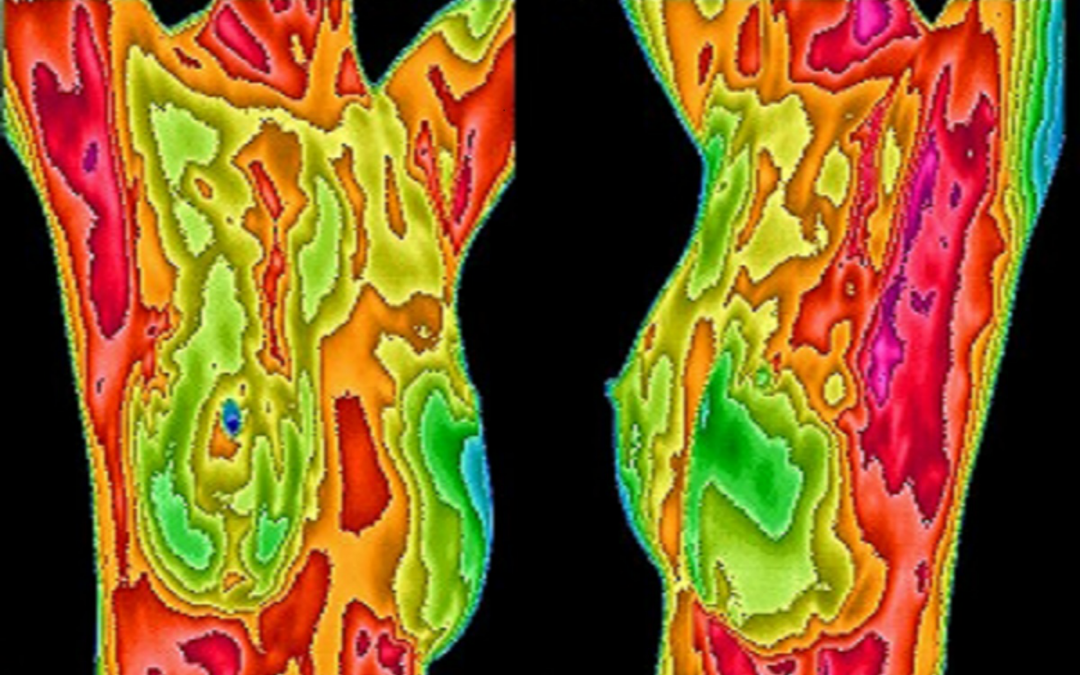 With 1 in 8 women in the UK likely to be diagnosed with breast cancer within their lifetime it’s more important than ever to become breast aware.

The readily available information on self-examination, free mammograms for the over 50’s, and all the work done by various charities to ensure that women are more in tune with abnormal changes associated with their breasts is certainly progress in an attempt to increase early detection and therefore reduce the need for invasive treatments.

However, there is still much debate about which screening tool or method is the best.

Mammography is the process of taking a mammogram. A mammogram is the image created when the breast is compressed between two plates and an X-ray is transmitted through the breast tissue.

In recent years, there has been increased debate regarding the efficacy of mammograms and even their safety. Some of the drawbacks include:

The repeated exposure to radiation that they require, which in itself can create some risk of cancer.
Non-invasive cancers are diagnosed and treated when treatment is not necessarily required.
They are not as effective for younger and other women with dense breast tissue/breast implants.

Thermography is a test that detects and records temperature changes on the surface of the skin.

Thermal imaging, which works by scanning the breast(s) using an infrared camera to produce a “thermogram”, has gained popularity due to its non-intrusive and pain free methods. The scan detects temperature changes within skin, the body’s largest organ. These heat patterns are directly associated with increased metabolic or vascular activity which may be caused by inflammation or the development/progression of disease. It has been suggested by thermographers that these heat changes can occur between 6 and 10 years before a tumour is big enough to see on a mammogram.

Could it be that heat detection can enable earlier intervention and identification of disease?

The benefits of thermal imaging are described as:

All of the above sounded very exciting and interesting to me. So, when presented with the option of a mammogram and ultrasound combination I decided to delay it until I had a thermogram.
The fee

£195. This included an initial scan, images, and a report.

I went to a local centre to have my scan. The room was thermally stable and 15 minutes or so were given to allow for the body to acclimatise to this temperature. That was all fine. The clinician, however, appeared to have no details about me at all. Not even my name. This was not the best start to the session as having competed a very lengthy form prior to my appointment I did not expect to have to re-tell my cancer story. It’s something that I feel quite strongly about. Having completed my orthodox treatment some 12 months prior I no longer felt like a cancer patient. Yet I was asked detailed questions regarding my chemotherapy, surgeries, radiotherapy and such. Regretfully it started taking me down a path I did not wish to go…

I received the report via email within 5 days. The speed at which the whole process was completed was impressive. At the top of the report were the findings:

Left Breast: TH-5, this is interpreted as “suspicious. High index of suspicion”. Not so good news. However, as I had mentioned to the clinician, this was the side I had had my skin and nipple sparing mastectomy and I still had a moderate seroma around the implant. This did not appear to be considered when drawing conclusions and was not mentioned within the report.

I decided to call the clinician to discuss these findings, as invited to do so upon booking. However, when I finally got through to her all she was able to do was to read the report document out to me. Which I already had. She was unable to advise or interpret further and continued to state that the report was likely inconclusive and that I should seek advice from my consultant. She also advised that an additional image in 6 months was recommended to track any changes, as a thermal image provides a blueprint that is unique to everyone. The fee for this follow-up would be another £195. Now, for someone who takes their health very seriously, and is not concerned about the cost of good health this did make me a little cross. I felt like I had been mis-sold a service. If the thermal imaging provides a unique blueprint for everyone and therefore it’s use is in tracking changes within this specific blue-print why was this not made more transparent at the start? I did not realise that I would need to spend just short of £400 to get information that was meaningful to me.

It has a high false-positive rate, which as in my case led me to have the standard mammography/ultrasound anyway (came back all clear!).

It doesn’t feel like the full picture. Although I love the non-invasive nature of this process it does concern me that it would lead to a rate of false-negatives…

Is It a Valid Tool for Breast Screening?

I think it does provide some useful and interesting information, but not in isolation.

No external test of the breasts is 100% accurate. However, thermography does have its place, alongside self-examination, MRI scans, ultrasound, and mammography in the early detection of/reducing the risk of this chronic disease. What’s important is that you are aware of all the techniques that are available to you, to give yourself the best chance of early detection, and treatment.